Recently, a few articles popped out at me.  One was briefly about the Steam network banning the title, “Rape Day”, which was a hit to their unstable company to customer relationship, in regards to censorship.  But I felt it was 100% RIGHT MOVE, on their part.  The game literally centralizes itself on gratuitous sexual violence.  So yeah, definitely not something we need as a game or really anything beyond what has been done already.

Personally, I think Rockstar crossed the line when they added a interactive torture scene in Grand Theft Auto V.  Sure, they weren’t doing it to push the boundaries, but maybe to see how a player would respond to torturing someone in-game.  It was sort like the Milgram Experiment, you didn’t necessarily have a choice unless you progressed.  Then again, maybe you did if you’d stopped playing. 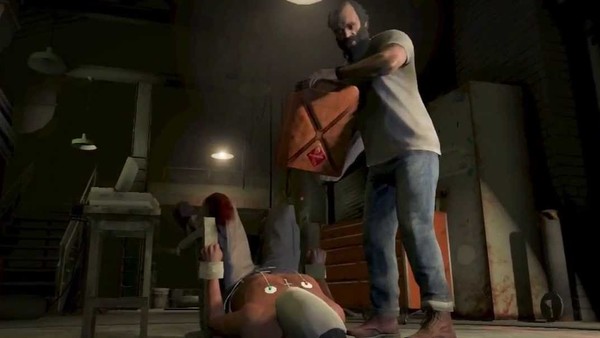 Now a couple days ago I read about Devil May Cry 5’s western censorship.

All I can say is, WHAT THE HELL IS THE PROBLEM???  It’s just a woman’s bare ass!  Not only that, it’s more like a half-moon!  Go watch an episode of “The Simpsons” and you’ll see more nudity there, male and female.  For the longest time, nudity and sexual censorship has been a real head-scratching topic for me.  It’s probably because I was an amateur artist in my high school days.  Or maybe it’s the fact, that I learned about art from books about popular artists of the Italian Renaissance. (Like the painting by Rafael seen below)

Why is the human body, man or woman, so scary?!  Isn’t sex one of our many necessary functions as human beings?!

Now I understand that children are never to be associated with the coupling of two human beings, outside the subject of birth.  It is just something we don’t do, so we protect our children by parenting.  Which stems from the lessons of our history, that are projected through previous generations to keep us protected until we are ready.   However, parents and adults cannot protect their children forever, as the world has its ways of revealing the fact of life:  anatomy, death, sexuality and violence.  Which is why we should be there for them, to give them the proper guidance on the realities of life.

I was roughly 11 years old, when I had my first exposure to graphic violence.  It was a boring Saturday and I ended up crashing on my living room couch.  I’d slept a bit, to just about 9pm, when my brother and sister popped in the movie “Friday the 13th”.  (both were 15 and 19 at the time)  Before they’d started it, I was told to get out and that the movie was too scary for me.

However, I was a bit of a hard-head and thought that I was big enough to watch a scary film.  After all, I’d seen Poltergeist and The Ghostbusters, there couldn’t been anything scarier than that.  Clearly you know where this is going, right?

I spent the entire movie hiding underneath the pillow with occasional peaks at the screen.  But the pillow didn’t save me from the terrifying sound effects of Jason stalking the inhabitants of Camp Crystal Lake.  Which was further intensified by the screams that fell victim to him, until the inevitable conclusion of the film.  Hiding wasn’t an option, it was almost as if I was being stalked Jason himself.  Yet just when I was told “it was over”, but it wasn’t, as the final moments tell you – “he’s still out there”

It was a harrowing first experience to nothing I’d ever seen before and it left me with nightmares for a while.  That is until I had a talked with my mom and dad, which quickly resulted in my two siblings getting their ass chewed out.  But after that, I’d realized that the movie was only fiction, just like any other movie or show.

The same thing happened when my mom found some of my nude sketches in my early-teens.  We talked and she gave me the guidance I needed to fully understand my own sexuality.  Her words were of encouragement; more for my art, than the sexual interest towards the body of a woman.

Turning back to how we view violence and sexuality in the modern media.  It seems as though a naked body or sexual relations are considered shameful, almost like Queen Cersei’s “Walk of Shame”  Which is why, I absolutely love HBO, Showtime and many other networks remember that sex and nudity can be an integral part of the narrative and art itself.  As a matter of fact, sexuality and our own bodily experiences come much more naturally than events of rage, trauma and violence.

Yet, I can play the remake of Resident Evil 2; where limbs are shot off, people are torn in half and crushed to death.  (Not saying the portrayal was a bad thing, the remake is PHENOMINAL!)  I’d say this game is, the 2nd most graphic depiction of violence I’ve ever seen in my 30 years of gaming.  (Whereas Mortal Kombat X is #1)  But the violence depicted really suits the game and truly amplified the horror experience.  Now God forbid that we see a bare-naked lady’s ass, genitalia or a full-on sex scene in an M-rated video game!  Because that is just too graphic for us compute.

The line in the sand is drawn only few meters when I step onto the beach in regards to sexual content, yet the other line is being washed away by the tide.

WHAT ARE YOUR FEELINGS ON THIS?